A Brief History of Mount Gretna 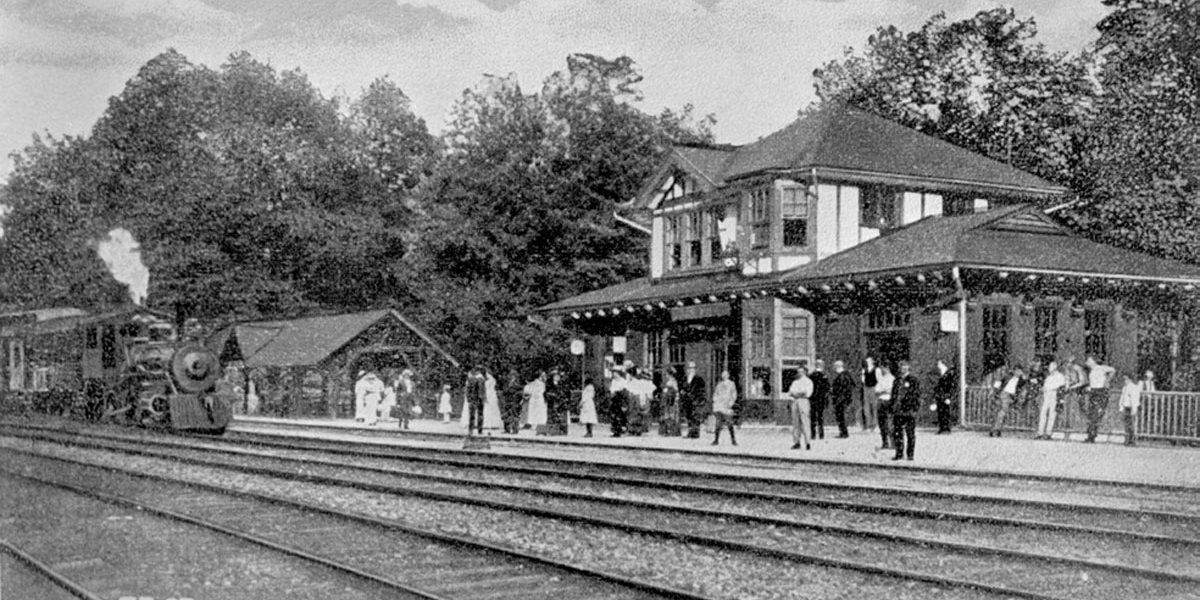 Peter Grubb’s iron furnace was ideally situated among the ore hills of Cornwall, amidst abundant hardwood forests and an ample supply of limestone. It went into blast in 1740, and was soon joined by similar furnaces at Colebrook and Brickerville, and a complex of mills and forges. By 1798 these operations had been acquired by Robert Coleman, who had immigrated as a boy of 16 in 1764. His great grandson, Robert Habersham Coleman, inherited controlling interest at age 21.

After the loss of his first wife, he ordered his unfinished mansion in Cornwall be destroyed without trace. He then embarked on a program of expansion of his estate. In 1883 he directed construction of a railroad which ran from Lebanon to Cornwall and on through the Conewago Hills to Elizabethtown. It was named the Cornwall – Lebanon Railroad.

Bob Coleman himself headed a committee to select station stops along the C & L. About three miles west of Cornwall, they came upon a particularly lovely area of huge pines and hardwoods, springs and a profusion of wild flowers. They immediately selected the spot where Old Pinch Road passed on its way from Lancaster to Lebanon, as an ideal site for a station and recreation area. A member of the committee, Hugh Maxwell, described it to his wife that evening and she suggested the name “Gretna.” The committee appended “Mount” to it – and so the area was named “Mount Gretna,” partially in memory of “Governor Dick.” He was one of the charcoal burners who supplied charcoal to the Cornwall furnace. They were the only previous residents of the area except for roving Susquehannok Indians.

There were now three principal interests in Bob Coleman’s life: his second wife and 5 children, his vast, prospering estate and Mount Gretna. Events to follow suggest that the latter was not the least of these!

Bob’s interest in Mount Gretna far exceeded its importance to the affairs of his sprawling estate. In 1884, he ordered the area at the Mount Gretna station be converted into a recreation park. The floor of the park was cleared and picnic facilities installed among the springs and varied trees and plants. The following year, he invited the Pennsylvania 3rd Brigade to encamp at Gretna and had grounds adjacent to the park cleared. This was to be the summer home of the Pennsylvania National Guard for the next half century. That fall he ordered a dam constructed across Conewago Creek, and by the spring of 1886, Lake Conewago appeared, much as we see it today.

In 1890, Bob invited the Farmer’s Encampment to Gretna and made all provisions, including the large building we see there today. A siding from the C & L was run in to the Park. Steam from an engine powered a generator which first lit the Park by electricity in August, 1890. By this time, the crowds drawn to Mount Gretna by the myriad of attractions and its sheer loveliness had swelled to 20,000 and more.

Historic perspective might suggest that all the foregoing was preparation for 1892 – the defining year in Mount Gretna’s history. In 1891, dissension over commercial activities arose at the United Brethren camp meeting at Stoverdale. A committee was appointed to seek a new site. When they approached Bob Coleman, his response was instant. He leased them 30 acres across Conewago Creek from the park, cleared the area and gave each cottage owner at Stoberdale $120.00 to erect one at Mount Gretna on the lot of their choice. The lots were 20 feet by 24 feet with intention that they be occupied by tents but by the first camp meeting in August 1892, 100 cottages had been built.

Services that year, and until 1899, were held in an open “temple area.” The tabernacle did not appear until 1899.

At the same time, meetings had been held in Lebanon and committees formed to create a Pennsylvania Chautauqua, patterned after that in New York state. Again, Bob Coleman responded generously and the committee chose a site adjacent to the camp meeting grounds, with Old Pinch Road between them. By the time the first Chautauqua was held in July, 1892, a dozen cottages, several public buildings and the Auditorium designed by John Cilley had been erected. The Inn followed in 1898, and the Hall of Philosophy in 1909.

From that first year of 1892, camp meeters and Chautauquans alike embraced Mount Gretna as their summer home, and their stays extended from Memorial Day to Labor Day. And alike they reveled in the intimate, friendly communion which the delightful woodland surroundings engendered. It was inevitable that Mount Gretna would become one of the most charming summer resorts in the Nation, and after World War II, to begin transition to a year-round residential area which is virtually unique.

The Conewago Hotel was built in 1909, and overlooked the Lake until just before World War II. It fell victim to the automobile, the depression and movement of the National Guard encampment to Indiantown Gap. It was demolished in 1940.

An enterprising gentleman with great ambition, Abraham Lincoln Kauffman, purchased land adjoining the Camp Meeting Grounds in 1907. He initiated construction of his own resort named the “Willows.” A store and hotel appeared and Mr. Kauffman’s own home, now the Mount Gretna Inn. In 1926, he opened a park just east of the C & L park, and adjoining the railroad. With a very large swimming pool, a carousel and other attractions, the summer opened optimistically. Unfortunately, most of his events were rained out. Mr. Kauffman suffered a cash shortage and the bank foreclosed on his holdings. He has left us a lovely area known today as the “Heights,” and it rivals Chautauqua and Camp Meeting in size and beauty.

We are eternally indebted to Bob Coleman, Abraham Kauffman and to the foresighted Chautauquans and Camp Meeters for the gift of Mount Gretna. Her appealing charm lies in the trees and quaint cottages which have been so lovingly preserved. To this have been added the many new activities which are in harmony with Mount Gretna. So long as no major highway or commercial activities intrude upon her, we may hope that she will continue to offer an idyllic haven from today’s frenetic world.

This article was prepared for the Mount Gretna Area Historical Society with the purpose of educating the general public about Mt. Gretna’s history and encouraging the reading of Jack Bitner’s book, “Mt. Gretna, A Coleman Legacy,” revealing the uniqueness of the area.